It seems like I am always heading into storms.  Between Lost Springs and Douglas there was only one truckstop and rest area.  I found nothing I wanted to eat at the truckstop and lucked out at the rest area.  There were two old men sitting under a tent selling snacks.  Not just selling, but taking donations for snacks.  They wanted to give me so much, but I settled for a couple ziplocks of fruit and vegetables and homemade muffin.  As I sat there to eat, the rest area hostess came by and talked to me.  She told me all about what was happening with the eclipse and about where to stop along the way.  The eclipse is a big thing here.  Whe said she was expecting 10,000 people to be at her rest stop to watch it.  My plan was to be in Jackson, WY for the eclipse, but all campsites, hotels, and everything else is booked.  So now, I will try to be on some desolate road in Idaho.  She advised me to stay off of the interstate on my way to Casper (two days away) and stay on Highway 20.  She also said it would protect me from most of the wind! 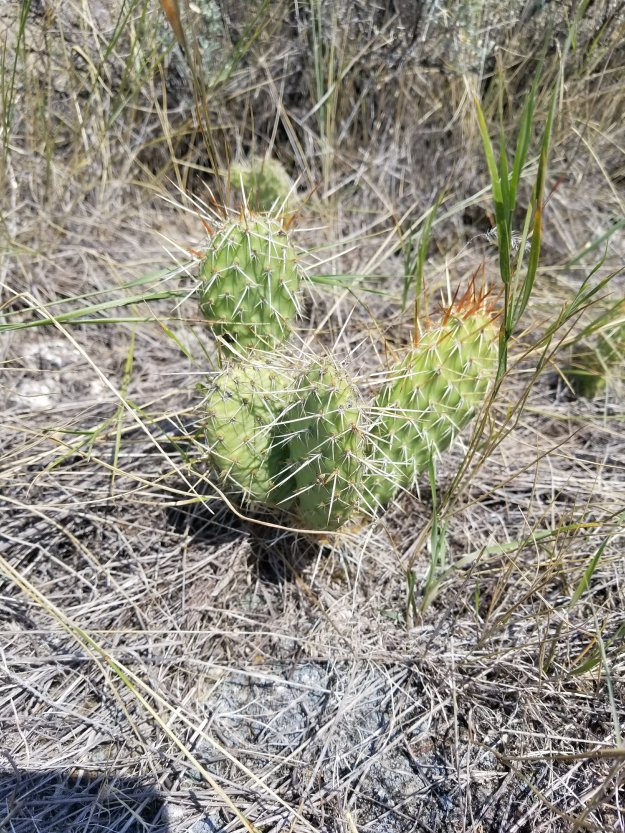 I guess I was more tired than I had thought.  The rest of the way was slow.  I stopped a lot to look at the cacti and different rock formations.  Occasionally I would see a group of pronghorn.  Highway 20 was more out of the wind and the only traffic on it was from a cement factory.  The road itself was covered in cracks filled with rubber.  That kept my mind busy because each time I hit a crack my tires would be absorbed in the rubber and my pace slowed dramatically.

As soon as I reached Douglas the rain started.  I hid out at a car wash for 10-15 minutes until it slowed enough to move on.  In town, there were more choices for food than I was used to.  I decided to splurge and went to Sapporo Japanese Steakhouse.  Everyone in there were Chinese.  From there I went to the railroad museum and talked to the caretaker.  She advised me to go to Riverside Park for the night, which had free camping and hot showers.

They also had a sign that read no camping on the grass, but due to the sprinkler system.  The sprinklers came on Monday, Wednesday, and Friday at 3 AM.  I scoured the park for somewhere to pitch the tent and found nothing.  I tried in the parking lot, but only bent one my stakes.  I then tried under a picnic table, but it was too short.  I then tried on top of the picnic table, but my tent was too wide.  I settled on hanging the hammock with the tarp over it.  At this point, the skies were clear and it was nice out.  Soon after, the wind picked up and the rain started.  I should mention, that I picked a spot not directly over or near a sprinkler.  The sprinkler would only hit my tarp.  When the storm came, I quickly got the tent out and set it up.  I was camping on the grass on a Wednesday and they could get over it.  I had still not acquired any more stakes and had was using some stakes for both the tent and the tarp.  It stormed, not just rained, until nearly 1 AM.  Then, at 3, the heard the sprinklers come on.

That morning, I woke up at 6 and the rain had started again.  It rained until 3 pm and I stayed inside the tent the whole time.  I went through all of my peanut butter, snack bars, and tortillas.  All that was left was a jar of honey and some dry cereal.  I probably could have made it to Casper before nightfall, but decided to make a day of Douglas.  I went to the grocery store and loaded up on food and then to the laundry mat.  There I met a couple of guys that followed and crewed at music festivals.  They were living out of a small Toyota truck with a bed cover.  They were nomads, some might say hippies.  They did offer to get me stoned but I decided against it.  One of them said that they pick up a lot of extra gear after each festival and that they had camping gear they were sorting through.  When he mentioned the lot of stakes I offered to buy them off of him and he just gave them to me.  Now, I have almost too many stakes! They invited me to winter with them in California at a nomad camp called Slab City.

After leaving them I had dinner and then met two more guys at the campground.  They were doing a summer tour of Canada and making a loop down to Colorado before heading back to the east coast.  I talked with Patrick for a long time and eventually followed him to look at an old Toyota mini motorhome he had spotted.  It measured no more than 16 foot and we just happened to catch the owner.  The owner opened up the camper and then showed us his shop and all of the toys he was working on.  Patrick would make for an excellent traveling buddy and I am sure if I met him in Arkansas he would have dropped everything to come with me.

Oh, and my shoes are dead…