Having only two days left on the road I thought it time to find a way home.  The fastest and cheapest way I found was a flight from Seattle to Houston with a layover in Dallas.  The ticket only cost $100.  From Dallas I would catch a train to Little Rock for $50.  For some reason a flight to Dallas would cost $350.  I would also have to ship my bike home which would end up costing as much as getting myself home.

My legs were feeling better and I felt rested for the day.  I would conquer the last pass and ride as far into Seattle before stopping for the night.  Leaving the rest area I started the 18 mile climb to the top of Stevens Pass. 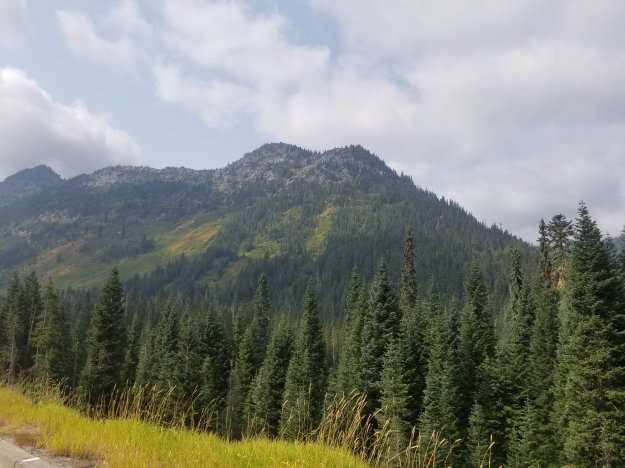 The climb was uneventful by my standards.  I still laugh when people tell me how dangerous it is to ride on the highways or on certain highways where there is but a one foot shoulder.  By now, there is not much that intimidates me.  At the top of Stevens Pass there must have been a mountain bike festival or race.  The resort there was filled with mountain bikers.  They had a lift like you would see at a ski resort, but for the cyclists.

The rest of the day would be easy, and all downhill.  After coming off of the summit there was almost an immediate change in the landscape.  The woods resembled a rainforest with thick underbrush, moss clinging to everything, and the number of creeks and waterfalls I have never seen before.  It rained/misted the rest of the day which felt appropriate since on the other side was nothing but smoke.

Where it started to flatten some I started seeing blackberries!  Not just a vine here and there, but lining the highway.  They had to be at the peak of their season.  I couldn’t stop eating.  Back when I met the survivalist she mentioned grazing on blackberries and I never really understood what she meant until then.  I grazed and then got on the bike for a few miles and then would stop to graze again.  I started to notice that certain berries looked overplump.  These had started to ferment and were the tastiest.  I’m sure I was a sight on the side of the road in my spandex.  I was surprised nobody else was out picking. 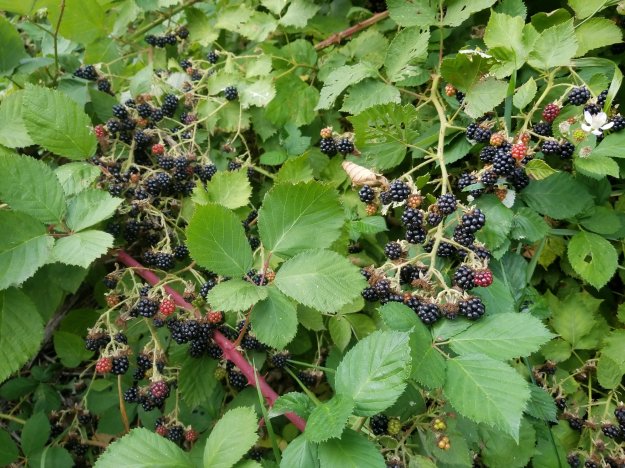 It started getting dark earlier than I had expected.  Between that and the constant drizzle I thought it best to find somewhere for the night rather than pushing towards Seattle.  It was not even 6 o’clock and I had my lights on.  Wallace Falls State Park was just north of Gold Bar and it seemed like my best option.  I stopped in Gold Bar at a pizza pub for an early dinner.  I find it odd that if I order a meatlovers pizza they stack the meat on covering every inch of the pizza, but a veggie pizza looks like they purposefully try to spread the veggies out to allow them room to breathe.  And a cheeseless, veggie pizza looks even more barren.  So afterwards, I stopped at the grocery store for a snack.

The state park was a few miles North of the highway and up a hill.  When I reached the campground there was a girl standing in the parking lot brushing her hair and an older guy that had just pulled up.  The older guy and myself, both looking for a place to stay, inspected the area.  They had about 8 cabins that wrapped around in the woods, but no campsites.  Coming back to the parking area the guy asked the girl and she said there were only two campsites in the park and both were filled, one by her.  She offered to share the space with us if we liked.  I took her up on the offer and pitched my tent next to hers.  I never saw what happened to the older guy.

Lindsey was in her early twenties and car camping for the weekend.  We stayed up talking about so many things for most of the night.  Most people reading would think it strange and dangerous to invite strangers to share your campground.  And even more to stay up talking rather than hiding in your tent.  Lindsey, like most others I met on my trip, have adventurous souls.  They forego the fear to allow the adventure to happen.  Hopefully she is off on another adventure.  We eventually went to bed, in our own tents.

Even after a good night sleep I was still tired and lacked all motivation to move on.  Not sure if my fatigue was due to the smoke or the thought of my trip coming to an end.  I also can’t remember my last zero.  I had been wrestling with continuing on or returning home after Seattle.  I think I had known for a while that I was going to head home after reaching Seattle, but didn’t want to admit it to myself.  Rather than spending another night with Deb I opted for a hotel room, using points to book it.

My usual routine for off days is laundry, inventory, resupply, and bike cleaning.  In the evening I met Deb and her partner at a bar.  He had spent the weekend sailing Lake Chelan.  He was an interesting guy that dominated the conversation with his adventures.  I attempted to drink a local beer, but once again couldn’t stomach the taste.  It was almost 10 when we left.  Wenatchee has a bike trail that makes a loop around the river.  Even that late it was still busy with activity.

I was just as tired the next day, but wanted to tackle Stevens Pass, the gateway to Seattle.  Everything up to the pass would be uphill.  I hardly remember riding from Wenatchee to Leavenworth.  Leavenworth looked like an old German village.  I didn’t stop to browse around because it looked too commercialized for my liking, but they had plenty of other people stopping to spend their money.

From there it was a steady climb.  My legs still sluggish I stopped at food truck for an overpriced veggie burger and coconut almond-milkshake.  I sat there for 2 hours looking for the energy to push on.  I also played with a couple of ground squirrels.  They weren’t shy at all about investigating my plate, my bike, or me.  One of them was bold enough to sit on my shoulder. 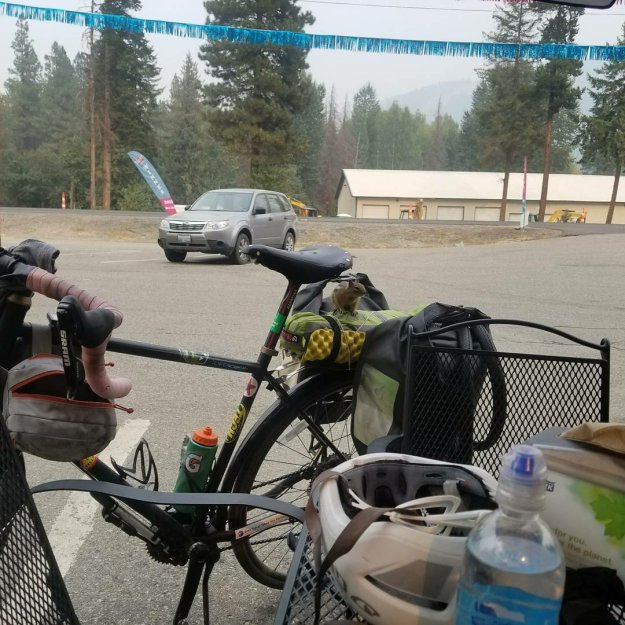 My next stop was the Nason Creek Rest Area.  It wasn’t five miles down the road.  I had gone 40 miles and was wore out.  At the beginning of my trip I would have considered that a good day.  Now, 40 miles is just a morning ride.  It’s amazing how perception can change.  Regardless, I was done for the day.  Like rest areas before, this one had volunteers working the concession.  And one of them had a razorback shirt on!  She was a transplant from Brinkley, AR.  We talked a little as I played with her dog, but I was tired and needed a rest.

I scouted around looking for a place to camp.  I avoided being anywhere near the signs that said no overnight camping.  Not sure why those signs are even there or who enforces it.  Around 8 PM motorists start rolling in and they don’t leave until 8 AM.  I found a grove of pine trees out of the way and pitched the tent deep enough that it couldn’t be seen from the road.  One of the CDT hikers told me to look for pine needle beds to camp on.  He said they were warm and would add a layer of comfort, and he was right.

Quinton found a hiker hostel for PCT hikers and bunked there.  He was 42 miles ahead of me.  My goal was to meet him there that night, but that didn’t happen.