For some reason I thought doing a short, 165 mile, thru-hike would be just as easy as jumping on the bike and riding for the equivalent amount of time, about two weeks. I was wrong! I was nowhere near prepared for a thru-hike. I guessed that I would be able to do about 15 miles per day and that it would take me 10 days. I hadn’t counted on the Ozark Mountains being so mean. The same Ozarks nearly killed me last summer on my trip, so I should have known better.

My dad and uncle dropped me off at the trail Sunday evening and all seemed good. It was about 46 degrees at 5:30. My plan was to hike in a ways and set up camp. I passed by a few old, lonely chimneys, some random shoes, and several creeks. 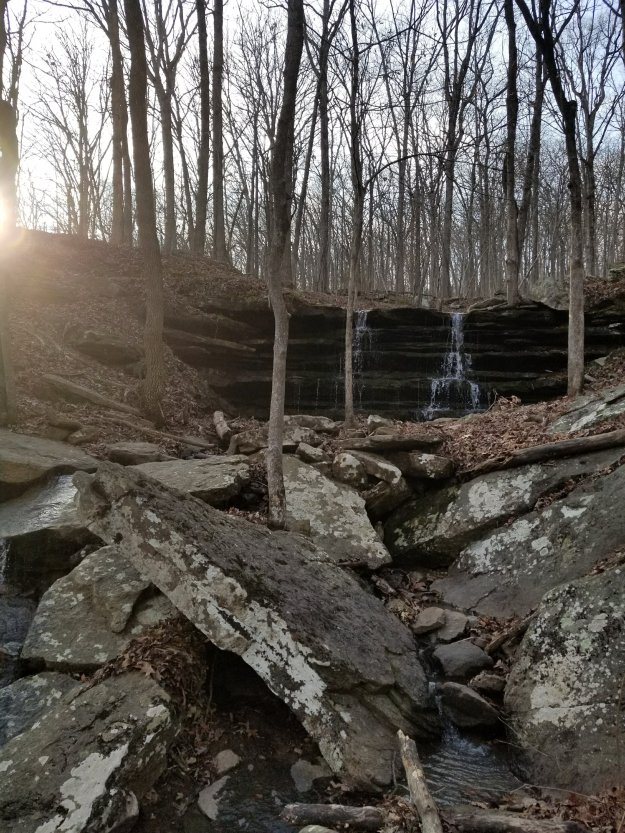 I had only hiked 3 miles when I came to my first real water crossing, Frog Bayou. Aptly named because the frogs were singing when I got there and I heard nothing before getting to the bayou. At the boat the frogs don’t start up until around 9 pm. I could either cross the bayou and make camp or make camp and cross in the morning. I opted to cross then. 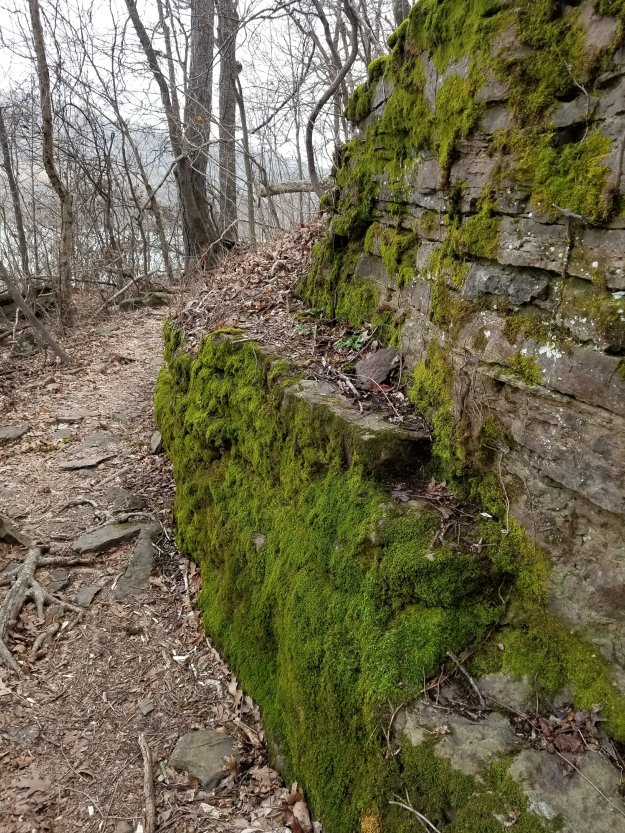 I took off my shoes and socks and waded in. The water only came up to my knees and wasn’t too cold. This is where the trekking poles really came in handy. I would have fallen in several times if not for them. Once to the other side I dried off and slipped my shoes and socks back on. There was a small stretch of semi-firm mud that separated me from the trail. I could see that someone before me had walked over the mud and I could see that his footprints were not deep. However, my first step and my shoe sank 6 inches into the mud and my foot popped out. I tried so hard not to get the shoes wet and it was sunk in the mud, filling with water and my sock now coated in mud.

About 100 meters in from there was an established camping spot. Established meaning flattened from tents and cleared of brush. I made a lot of last minute decisions for this trip. I wasn’t scheduled to go out for another week, but my plan got pushed forward because of a new job (moving to Pennsylvania).

So I added more weight than I had intended and had gear I had never used before. The 0 degree sleeping bag was too large and heavy to fit in my backpack. I decided that bugs wouldn’t be a problem, but rain would, so the tarp would be a better choice. GoPro plus accessories added another pound, and the tights just didn’t fit right.

I had never set up a tarp as a tent before, but watched a YouTube video and thought it would be easy. It took me 30 minutes to get something that I could sleep in. Oh, and I also tried hanging a bear bag, to keep the bears (rats and racoons) out of my food. (Bear bag ripped, need a new bear bag) Only 3 miles that day!

Because my trip got pushed forward I had not yet purchased my new sleeping bag or sleeping pad. The blue walmart pad, which I dub Blue, was a last minute effort to add insulation. Pads are rated with an R-value, or a measurement of the thermal resistance (how much the pad blocks the ground from absorbing your heat). My pad, the Nemo Astro, is not rated, but similar pads have an R-value of 1. An R-value of 1 will keep you from losing heat at around 48 degrees. That would explain my problem last summer. Blue has an R-value of about 2, which will keep you warm to about 36 degrees. It dropped to freezing that first night. I did learn that Blue on top of Nemo was much warmer than vice versa. The pad I intend to get for future trips has an R-value of 3.9, or about 15 degrees. That paired with my future 20 degree sleeping bag should keep me nice and warm from now on. My sleeping bag and throw blanket combind did keep me from losing heat to the air, but my backside was being drained of heat all night.

The next morning, after not sleeping, I picked up and set off. My goal was to get to White Rock Mountain and camp there. It was 15.7 miles away and doable according to my prediction of my hiking abilities. I felt so accomplished as I was passing the first two mile markers. After that, my body had had enough. Every place that my pack touched was sore. My shoulders and hips most of all. By mile 7 I was DONE. I found a nice big, flat rock to crawl on top of and took a nap. 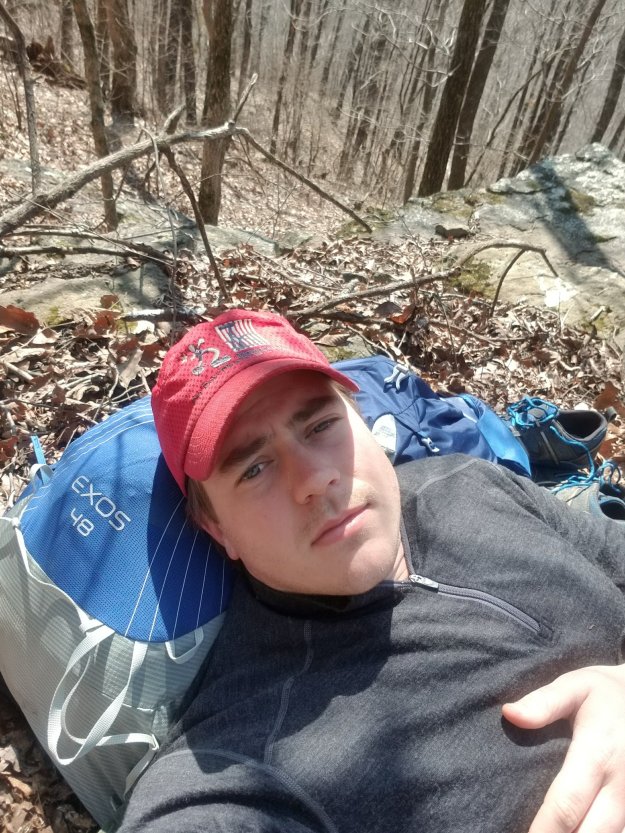 My dad and uncle had already made plans to find me and bring me a warmer sleep system, but I was DONE. I told them I was less than a mile from a road and would start heading South on it, and I did. So much easier! No more up and down ravines and stumbling over roots and rocks, because I don’t lift my feet high enough because my hip-flexors are weak. I made it three miles down the road in an hour, where it was taken me one hour to go one mile in the woods. 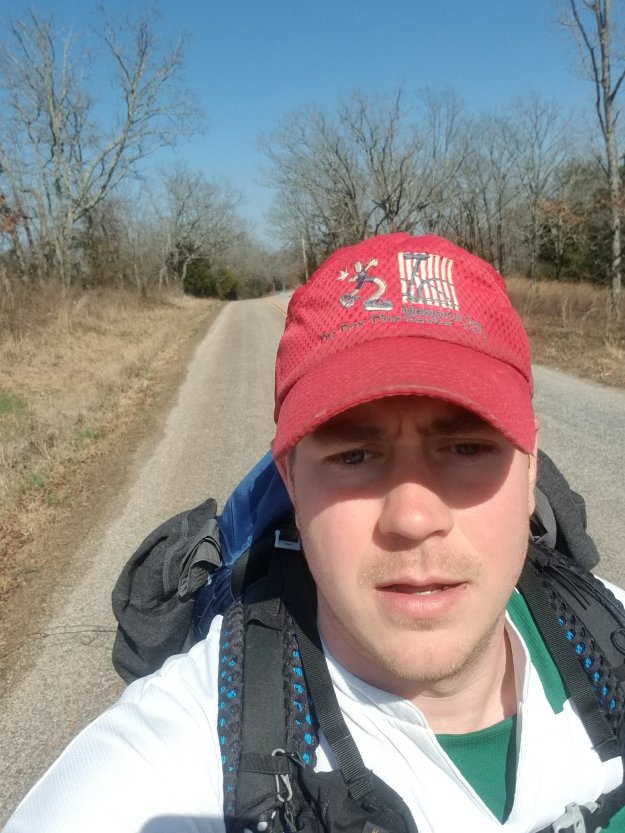 It was just before 5 when I settled in at the backside of a church. I set up the tarp to keep the sun off of me and yet still allow for its warmth. I sprawled my sleeping pads out, one to dry and the other to rest on. Oh, right, my sleeping pad fell in one of the creek crossings. I was mentally checked out by then. I wass crossing a creek and the best way across was by balancing on a fallen tree. The creek was not but 8 foot across and the water was rushing by. I had just made it to the other side and was trying to get over another fallen tree making a fence between me and land and the Nemo slipped out and started washing down stream. This is where I should have stopped, grabbed the GoPro, and then chased after. Instead I tossed the pack and poles on shore and took after it. Luckily, it got caught in an eddy and I was able to catch with no problem. 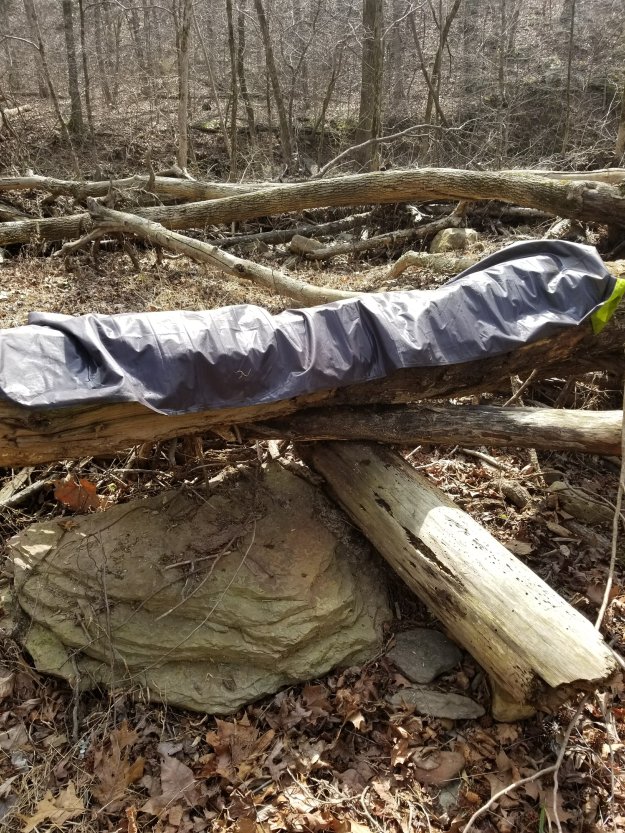 I stop at churches a lot for water, to rest, or to get out of the sun or rain. In Dubois, WY, I felt so welcomed by the church and community that I stayed for five days. Unfortunately, my experiences are more bad than good. I was at this church for probably 30 minutes when a woman drives by, then circles back to question me. With a negative connotation she said, “What are you doing? What are you doing? What are you doing?” It was obvious that I was not welcome there, a church. I told her that I was on the Ozark Highlands Trail, jumped off, and was now waiting for my ride to pick me up. Not satisfied, I added that I would pack up if not welcome and try the church a mile down the road. She replied that I could stay but better not leave any trash or mess with anything. Just once I would like someone from a church to sit down with me, offer me some water and chat. 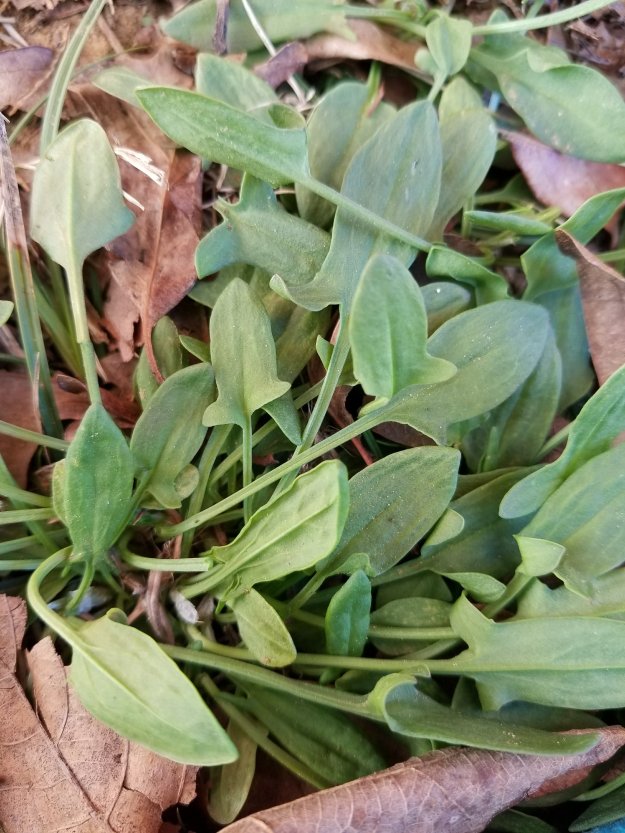 Samsung has this awesome feature that allows you to send SOS messages with the click of a button. Actually, three clicks of a button. It sends a message, reading,”SEND HELP”, two photos, a 3 second voice recording, and your GPS coordinates with a map. This sounds really cool, but it wasn’t. To open my camera I hit the power button twice. To send an SOS I hit the power button three times. See the problem? After a couple of accidental SOS messages I thought it best to turn the feature off. If you are a Samsung owner and want to worry your friends and family, you can find the SOS under Settings>Advanced Features>Send SOS messages.

Moving forward I will be doing day hikes and overnighters until I am used to carrying the pack and am comfortable with my gear choices.