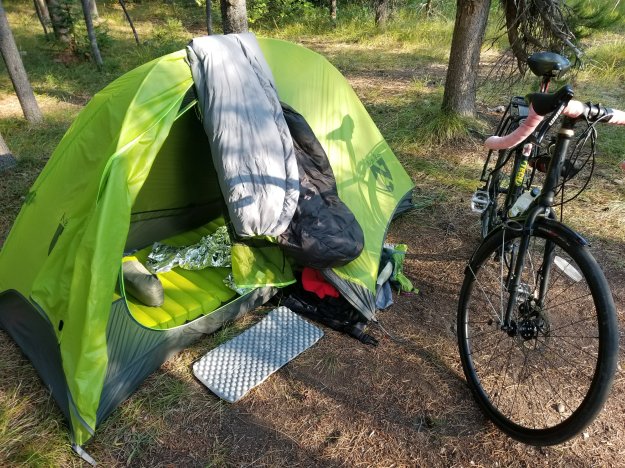 All of us were headed out: Dave and Ben to Jackson, Lars to Yellowstone, and the Englishman to campsite B?  Dave and Ben were gifted a load of food from a supported bike touring group.  They paid a company to follow them and provide all the food.  We got the leftovers from that gift. 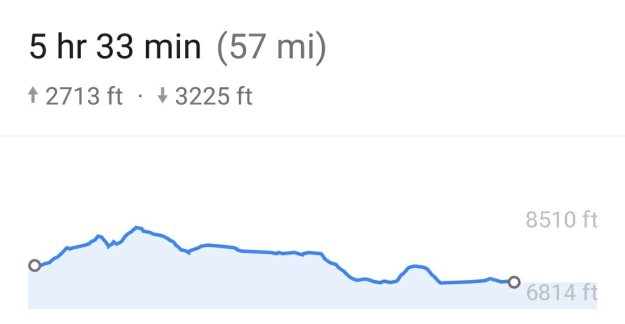 I was told that the route from Coulter Bay to Old Faithful was a flat one, but it was anything but flat.  I went up and down four passes before arriving at the park.  It felt tougher than the ride the day before.  Coming out of Coulter Bay we got a good look at Jackson Lake with the Tetons in the background.  Once we left the lake we started climbing up the Continental Divide.  The roads were busy with people either heading home or up to Old Faithful.  At the top of the first climb we started passing all of the cars that had passed us.  It felt great to dominate all of those cars.  If it weren’t for all of them getting in and out of their cars and walking we would have flew by them.

We stopped at a picnic area for lunch and they all passed us back.  Quinton convinced  me that I should fill up on water after lunch so I went down to the river.  Thinking I would explore around I tried jumping over a small branch of the river and did not make it.  After that, I just took the shoes off and waded around.  The cold water was refreshing in the hot sun.  There was still a cool breeze, but it was much warmer than it had been. 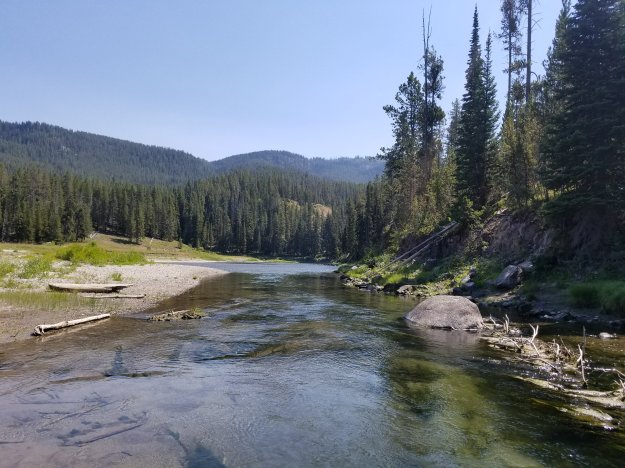 When we got back on the road the traffic was moving faster, but we were still faster.  That ended after we went through the gate to Yellowstone.  There was a major difference in the width of the shoulder.  It went from a 3 foot shoulder to a 1 foot.  The cars were now blowing by us and we started our second climb.  About halfway up we went over a bridge and read a sign that said waterfall.  There was also a sign that said the area was closed and that swimming and wading in the water was prohibited.  So, we went down to the falls anyway.

At the top of the climb the road overlooked Lewis River Gorge.  From there the road followed the river until it was the same level as the road.  That was the last I saw of Quinton.  He planned to stay near a campground off of Lewis Lake and I wanted to push on to Old Faithful.

I had not intended to even go into Yellowstone, but the CDT hikers raved about a breakfast buffet at Old Faithful and also a shower that you can sneak into on the second floor at Old Faithful Inn. From Lewis Lake I made my way up another pass and crossed the Continental Divide.  I met two cyclists at the top of the pass and they warned me that I had two more climbs before a long downhill to Old Faithful.

The first climb was not bad and it had a fast downhill on it.  Speed limit was 45 and I hit 46!  I didn’t pass any cars, but I didn’t get passed either.  At the bottom, I was spent.  I stopped again for another snack and turned on my rear light.  It wasn’t dark yet, but it was dark enough in the shade.  The last climb was straight up and it was a struggle.  So much so that I almost walked.  At the top I had 4 miles of downhill to Old Faithful.  I hit 48 on that downhill.  Coming over one rise I could see the steam from the pools.

First priority in the park was food.  I stopped a couple for directions and the man told me Old Faithful was about to blow and I should do that first.  I am glad I did otherwise I would have missed my chance.  I waited, took the photo, and then went to the visitor center to ask about camping.  They told me that the campground was closed and that I would have to find somewhere else to camp.  I could ride back up the mountain 15 miles or further North 15 miles and hope the campsite wasn’t full.  He also suggested I check with the lodges to see if they had any vacancies.  I was already spent and not about to ride any further.  I told him I needed food and then I would figure it out.  It was almost 8 and nearly dark after I found food and checked all of the lodges.  I offered to pay to sleep in their closets, but they said no.  I decided to scout around for a stealth camp.

I found some old buildings that looked abandoned and seemed like a good enough spot.  At that time, the same guy from the visitor center rode up and asked me how I was making it and then said he got me a lift to the campground North.  My stealth shower and breakfast buffet were no more.  Carl, a park interpreter, picked me up in his car and we maneuvered the bike into the backseat.  He was a nice guy and I appreciate him going out of his way to take me, even though I did not want to go anywhere.  He asked if I had a reservation to the campground and when I said no, he passed it up and headed straight to West Yellowstone, outside of the park.

Again, he was a nice guy and I’m sure he was trying to help, but he put 20 miles between me and that buffet.  He also drove me through the nice part of Yellowstone and into Montana!  In West Yellowstone he pulled over at the closest hotel and let me out.  I then proceeded to try every hotel in town for a vacancy.  Eventually I gave up and found a wooded area just outside of town to set up camp.  The trees were too short to hang my food so I parked the bike away from the tent with my food strapped to it.

That night I used everything I had to stay warm and was still cold.  I barely slept and the night seemed to go on forever.  Turns out, it dropped below freezing.  Once again, I would be looking for a warmer bag or alternative.

1 thought on “Escorted out of Yellowstone”