The day finally came and it was time to leave.  I was not going alone though.  Quentin came to the hostel friday night and also decided to wait around for the eclipse.  He started hiking the Appalachian Trail and after meeting some cyclists, traded in his pack for a bike and headed West.

We would ride as far as we could up the Togwotee Pass, elevation 9658 feet.  We stopped about halfway for a snack and to look at the eclipse progress.  After about 20 minutes we got bored and decided to ride another 30 minutes and stop.  I told Quentin that it would be nice if we could roll up on a barbeque and get invited to join.  Within a minute we see this guy on the side of a hill jumping, waving, and whistling at us.  At first I thought he couldn’t be waving at us, but we were the only ones on the road.  In the 20 miles we had ridden, we only saw a handful of cars.  Everyone was probably hung over from the night before or staked their claim on a place to watch the eclipse from and not moving.

Curious, we pull into the long drive and end up at a small snow resort.  The guy clears off a chair, hands us some eclipse glasses, and asks us if we would like to try his micro brew.  They were all set with their camera on a tripod with a black film covering the lens to capture the eclipse.  They also had a snack tray layed out and their cooler ready.

As the moon and sun started to align we noticed the temperature dropping, the sky getting dark, and waves of light dancing on the ground.  One of CDT hikers told me to look at the way the light curved around objects making interesting shadows.  The edges of the shadows were somewhat blurry, but I wouldn’t describe it as a phenomenon.  When everything went dark we had almost a minute and a half to look at the glowing ring and stars.  When it was over the chihuahua perked his head up and started running around in circles.  And then it was over.  We filled the water bottles and got back on the road. 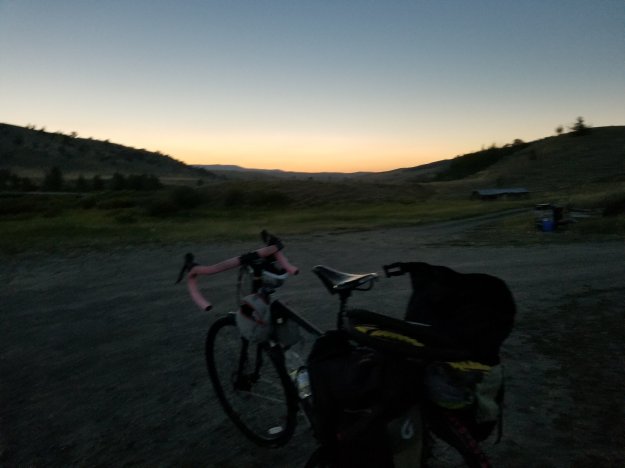 The rest of the climb to the pass was slow and grueling.  We never walked, but took breaks when the road flattened.  Almost to the summit and some girl in full lycra on a carbon bike with 21 cm tires blows by us.  I was struggling trying to keep the wheels straight and she passes me on the right.  Nothing ever passes me on the right so it made me jump and swerve.

At the top was a large pond and picnic area.  We spent about an hour resting, eating, and not wanting to move.  For lunch I had an instant mashed potato burrito and Quentin had instant mashed potato ramen.  He did some exploring around the pond while I attempted to take a nap.  The rest of the way should be nothing but down hill.

We ran into our first bikepackers just below the summit.  It was a group of six that had started in Washington together.  I stayed and talked to the group for nearly half an hour while Quentin rode on.  I finally caught up with him at a gas station several miles away.  I decided that the climb out of the Tetons was way worse than the climb in.  I flew down the winding roads, so fast that I almost started passing cars.  Quentin was a little more conservative due to him missing a bearing and having a broken spoke on his rear wheel.

Once we got to the valley floor we had another 15 miles to our campground on Jackson Lake.  At our campsite we found four solo cups and bottle of vodka left in the bear box.  We gave it a sample and left the rest for the next cyclists.  The two cyclists I met earlier that week that tempted me to go up the mountain were still there.  We spent the evening talking with them, an Englishman doing a zigzag tour of the U.S., and a German rollerblading from coast to coast.