Sunday after lunch I got back in the car and drove the 8 hours up to Norfolk, NE.  A friend of my Dad volunteered to give me a lift back to Neligh.  Justin saved me a day’s ride.  I camped that night at a park in Norfolk.  In the morning, I woke up to walkers and joggers.  Actually, I was awake, just not up.  One group was the Norfolk High School Cross Country team.  One kid told me they had already ran 180 miles that summer.  I hope the Tech Cross country girls have run at least that much this summer.  Some have asked whether I lock the bike up and how.  I do lock the bike, most times.  My panniers have a large buckle with an opening of the center.  I run the cable lock through the buckles, around whatever, and then through the frame.  If there is nothing to lock the bike to, then I run the cable through the wheel.  Someone can still steal the bike, but they won’t go far if trying to ride it. 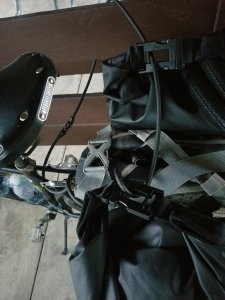 How to lock the bike

The ride from Norfolk to Neligh seemed so short.  What took me a day took Justin not even an hour.  Justin looked and seemed much younger than he is.  When talking to him on the phone, I expected someone in their early 30’s.  Thanks for the lift.

Since I had planned to ride the Cowboy Trail, I thought I should give it a try.  It is known for being covered in goat head thorns and many cyclists on the blogs advise against riding it.  Even people in town advise against it.  After about two miles, I hopped off.  My 14 mph average that I have been holding dropped to an 8 mph as soon as I hit the gravel.  It felt kind of like being on an elliptical or exercise bike and someone coming by and cranking the resistance all the way up.  Occasionally I would get back on the trail if I saw something interesting, but I was more than happy on the road.

One of the interesting things on the trail were the many bridges.  I am told they get better, bigger, and higher the further West.  Every now and then I would spot a small building located between the road and the trail.  I assumed they were toilets and did not stop until the 3rd one I saw.  Each one was painted by the locals.  Turns out they were some kind of electric room.  They were all unlocked and looked like they were abandoned and not used for many years. They would make a perfect little bunker or bike hotel.  I will try to stay in one before reaching Chadron.

While in Owasso, I took the bike to a bike shop to have some work done.  My chain was stretched out so I got a new one and I had them give it a look over.  One of the things they did was tighten the brakes.  It did not take me long to learn that the brakes were over tightened, and I had to stop and adjust them.  So, I can’t blame solely blame the trail for my diminished speed.  After that I was rolling smooth and fast-ish.

It is amazing the things you can find on the side of the road.  The usual trash includes, bottles, cans, plastic bags, diapers, and McDonald’s.  The better items are hats, gloves, and sunglasses.  The best things I have found were a sling bag, an LG cell phone, a Samsung S6, and the $20 I found that day.  The next sign said just a few miles to O’Neill, the Irish capital of Nebraska.  The very next sign was for a casino.  I was feeling lucky and thought it a good idea to see how far that $20 would go.

Can you see it?

All of the food places in town were closed.  I stopped at a flower shop to get directions and the ladies kept me talking in there for nearly half an hour.  They were nice and wanted to mother me, but I was hungry.  After leaving the shop I ran into an older couple that started asking me questions.  They were from eastern Arkansas and also very nice.  They kept me another 20 minutes.  By this time it was nearly 2:00 and I was running on nothing.  I was not yet hangry, but I was getting close.

The truck-stop offered the typical breakfast, burgers, and steaks.  So I got my usual pancakes and hashbrowns.  The man at the table next to me kept trying to strike up a conversation with me.  I tried to be nice, but until I got food I was not feeling talkative.  The only person that did not talk to me was the lady at the table behind me.  When she left, she left a $20 to buy my lunch.  After a little food, I obliged the guy and talked some with him.  After he asked all of the usual questions he then went into his life story.  He was a little awkward, but mostly lonely.  Before leaving he left $10 for me to get dinner on.  I must have had a friendly, inviting look about me.

O’Neill was my destination for the day, but it was still cool and I was still fresh.  The next town, Atkinson, was only 18 miles.  When I got there I stopped to scout the city park.  There was a city pool, but I opted for a shower under the faucet outside of the park bathroom.  I would usually set up the hammock and relax until dinner , but the mosquitoes were terrible.  Instead, I set up the tent and napped for almost 2 hours.  I remembered then what I had forgotten to bring on the trip, a pillow.  Just before 7, I packed up and went looking for food.  I stopped at a Dollar Store to find a neck pillow with no luck.  I found something, but would hold out until I find something better  I then went to the grocery store, but they were all closed.  I asked someone what was open and they said the bowling alley was the only thing open that night.

The bowling alley, named The Alley, was everything to this small town.  It had liquor and beer, coffee and espresso, ice-cream, pizza and burgers, and bowling.  I ordered a small pizza, that was surprisingly decent.  Since I had recently come into some money, I thought I would pay to camp.  The campsite was an unattended park with an outhouse style bathroom.  I took another shower under the faucet outside and set up the tent for the night.

1 thought on “Back on the Road”