I was supposed to meet Bryon at Mike’s place in Kincaid at one.  I slept in the best I could, thinking it would be an easy ride.  I got to thinking about the mornings that I woke up to go to work.  I was rarely unmotivated, but by the end of the day I was mentally exhausted.  All I wanted to do was veg out on the boat.  Just the thought of physical activity made me tired.  The days that wore me out the most were when I was in the office all day.  Now, I am on the road constantly and I am still wore out, but in another way.  My entire body is tired, tight, and achy.  I do a few stretches every morning to help wake everything up, but even that is not helping much.  It is time for a real day off, but not today.

For breakfast I had peanut butter crackers.  I should have had more, or at least stopped somewhere along the way.  I did mix up a gatorade, which helped.  Right before leaving some siren that sounded like a tornado warning went off.  I was hoping that it might lift me up and carry me to Kincaid.  Rather than getting back on Hwy 169 with the trucks and no shoulder I opted for the old highway.  It took me through a couple of small towns, but eventually led me to a gravel road. From there I got back on Hwy 169 for a short stretch before going east on another highway.  One with a little more shoulder and less traffic.  I wanted to stop somewhere to grab a snack, but Mike said was going to have pizza waiting!

The ride east was difficult with that wind from the south hitting me.  I kept thinking that I would run into Bryon on the highway and he would offer me a ride in.  Once I got cell service I saw that Bryon offered just that, but Mike shot him down (thanks Mike).  Heading north again and I have the wind with me.  Not as strong as yesterday, but any helps.

With only five or so miles left I hear a car trailing me.  I thought there might be something wrong with them so I wave them to pass.  When I look back it Bryon with is flashers on.  Him and the pizza were the only things keeping me going.  It was hot and I was out of juice, both energy and gatorade.  Bryon to the rescue, he hands me a cold water.  With only a quarter mile to go I see a bike pull onto the highway.  It was Mike, there to escort me in. 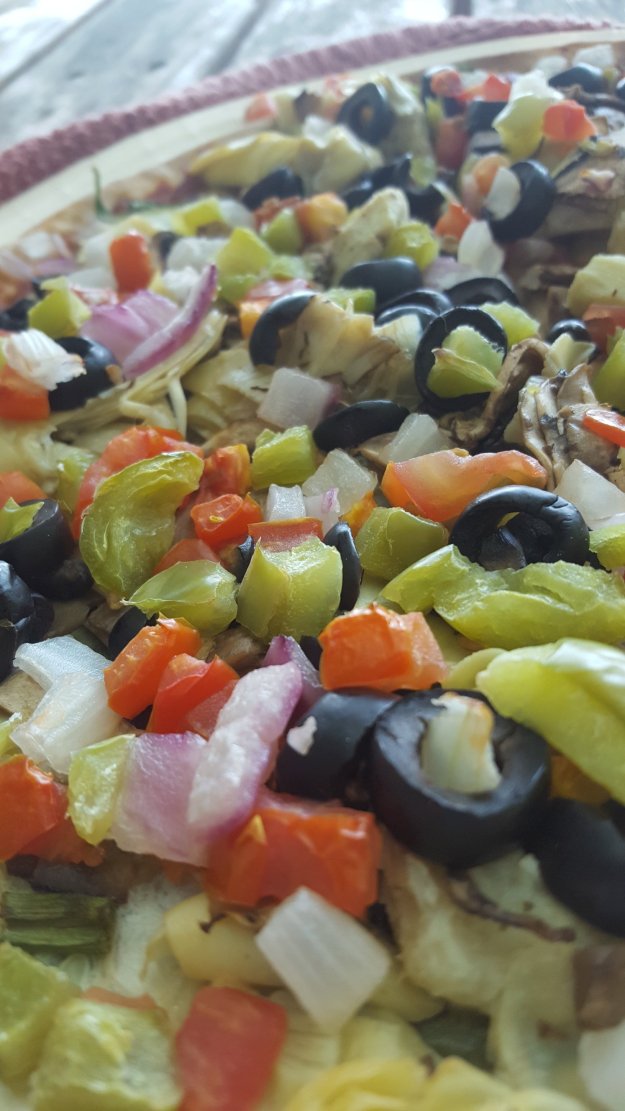 This is the pizza.  I know it was hard for Mike to order a pizza without meat and probably even harder to order one without cheese.  I appreciate that he risked his carnivore status for me.  When Carla, Mike’s wife, got home the meat pizzas and chicken wings were cooked.  After dinner and a few beers they wanted to visit their friends’ that were prettying goats to show at the fair the next day.  There is lot that goes into getting those goats ready to show.  Mike pitched in by rubbing one down with shaving cream or something similar.  We also got a tour of their farm and chance to meet all of the goats.

On the way home, a deer decided to tackle the truck.  This put a small damper on the rest of the night.  We spent the next couple of hours outside on the porch chatting.  The plan for the next day was for Mike and Bryon to ride their 5 lb carbon bikes with me up to Ottawa and then catch a ride back to his place and spend another night.  The closest donut place was 18 miles away so we would get up and ride their for breakfast.  Forty mile ride in the morning with donuts sounded pretty good.

1 thought on “Bryon, Mike and Carla”