It rained last night and the drip drip drip on my window seal would not let me sleep. A quick shower and organization of my panniers and I’m out the door by 7 AM.

From the hotel I was about 12 miles from the Santa Monica Pier. I chose it to be my starting point because it is where Route 66 ends. On the way I went by Marina Del Ray and Venice Beach. Maybe 6 miles from the hotel my bike made a noise I recognized from last year. What took me 30 minutes to figure out last year was immediate this year. The bolt holding the rack to the frame had come loose. No problem though! I just put it back in. Turned out to be a problem: the braze on in the frame had stripped just enough that the short bolt could not grab hold. I borrowed a bolt from the front fork and used it with no spacer. Hopefully it will hold… 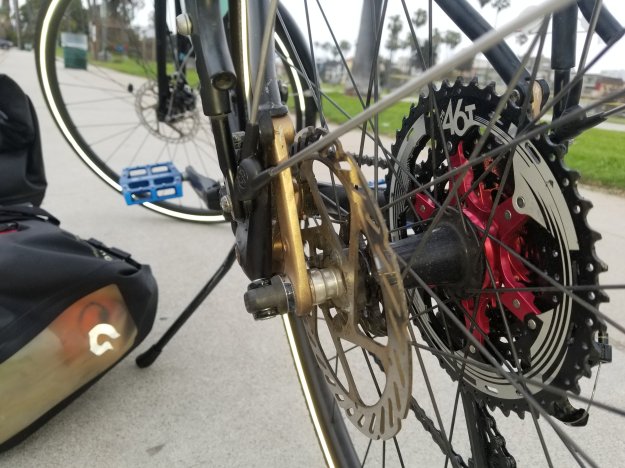 At the marina, I was surprised at all of the different sizes of boats at the marina. I was expecting pleasure yachts and millionaire ships, but I also saw many small boats (the type that I could afford). I didn’t stay long, too anxious to get going.

I actually went through Venice Beach twice, once getting to Santa Monica Pier and again on my trek East. Unfortunately, both times I was there too early to experience the full effect. There were a few people working out on Muscle Beach and some volleyball players training, but for the most part it was just people out for their morning runs and rides. And of course the many homeless that were camped out there.

I got to the pier around 8:00 and there was not a lot going on. Nothing but a burger joint was open and I’m not sure why they were. After walking down to the end of the pier, because I felt that’s what I was supposed to do, I went down to the beach. A lifeguard was getting his stand ready and more homeless were congregating under the pier. I rolled the bike through the sand and got my Pacific Ocean photo. I realized afterwards how bad of an idea it was to get saltwater all over my bike. I then went straight to the beach shower we both got baths.

I didn’t actually follow Route 66, mostly because I couldn’t find it and because my unconditioned body wanted to avoid the hills of Beverly Hills. I chose the path of least resistance and that meant going back through Venice Beach and then East from there. The rest of the day was spent zig-zagging my way to the cheapest motel in my desired stopping point.

I broke down not a mile from starting when my derailer shifting on it’s own, sending my chain up and over my cassette and locking up the back wheel. I got it straightened out, but I noticed the derailleur was still a little crooked.

I am against spending money when I don’t have to, but this is one of those times I needed to. No Warmshowers in the area and no campgrounds. Usually I would just find a city park, or secluded area and hide there. The homeless population have already staked their claim on all of the prime real estate. So, motel it is.

I was worried about the traffic here, but found bike lanes and paths all over. I’m so used to being cursed and honked at back home that it was a relief to see how friendly California drivers are. I felt respected and less like a cockroach needing to be squashed. Not one person yelled or honked at me!