No problem sleeping that night.  Not so sure about Quinton.  It was warm during the days now and I wanted to get an early start.  I got up, ate breakfast, packed up, and still no movement out of Quinton.  I decided that meant he wanted the morning off.  So, I left.

We had talked the day before about the route to take to Wenatchee and decided to get off of Highway 2 and go through the Coulee River Valley.  Google Maps on Samsung devices has an option to select bike routes.  In that option you can look at the elevation change of the selected route.  This is how I plot my route for the day/week.  The route would take us through a desolate stretch for nearly 40 miles.  What the map does not show us is the road type. 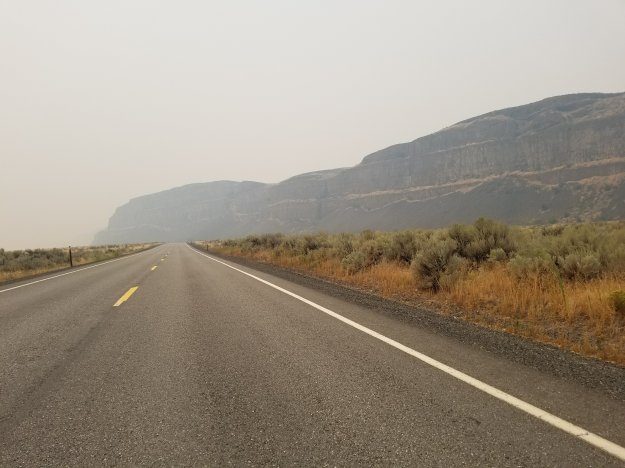 I zigzagged my way down to the river valley.  It took me through farmland and then some strange trailer park.  I later found out that they sale lots to people in Seattle that want an escape.  The landscape was spotted with these small buildings the size of storage buildings.  Most looked like they were abandomed and would make a great place to camp for the night. 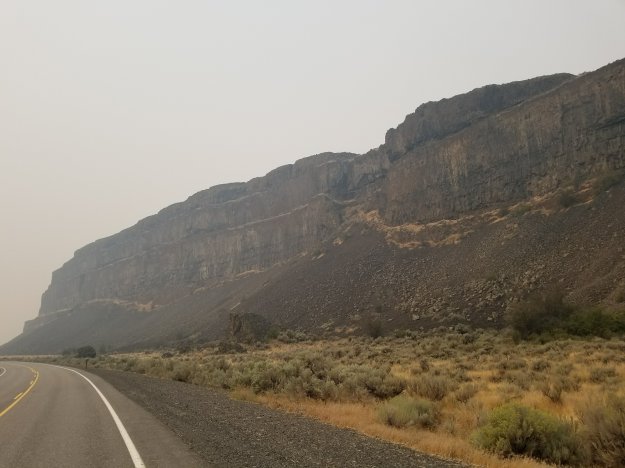 It’s never a good sign when Google leads me down a road with a sign that says “Pavement Ends”.  Google is really bad about that.  Nothing to do but follow it.  The next sign was a steep decline sign.  The road dropped to the bottom of the old river bed.  To either side were walls of rock that stretched up 100 feet.  I was back in the desert, which is odd because I was also in a river valley.  The scenary, if I could have scene it for the smoke, would have been spectacular.  I was a bit nervous moving forward but Google said the road went through.  This is also where I ran out of water, or started to worry about running out of water.  I had just enough to wash down my mid-morning PB&J. 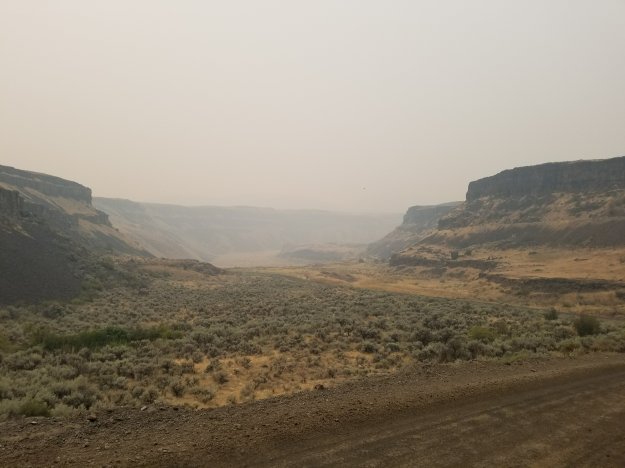 I was flying over the gravel and pumping through the mogels.  I focused all of my attention on conquering the road and none on what I would do if I didn’t find water.  Two more times I went down a steep grade only to be deeper in the canyon.  The grade was so steep and the road so rough that I had a grip on the brake levers going down.  The third drop was the steepest and most nerve racking, but when the road made a turn and the canyon opened up it was to a farm.Two guys were standing in the courtyard and they looked as surprised to see me as I did them.  I rode over and asked if they had a water spicket I could use and the younger man  pointed to this. 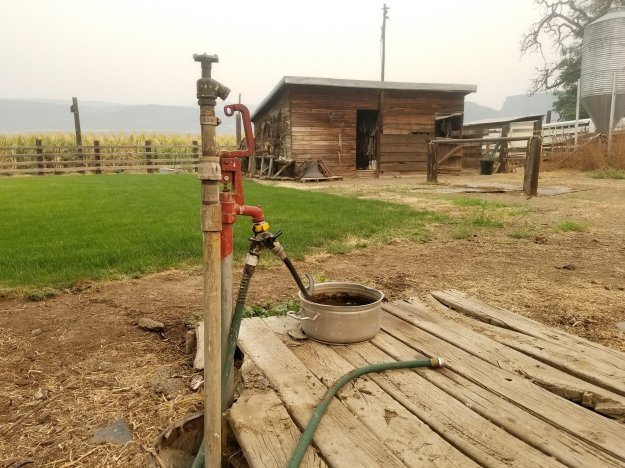 After drenching myself and quenching my thirst the man came over and got a drink himself.  I thanked him and he asked what I was doing so far away from everything.  I told him my story and when I told him I was from Arkansas he said his dad had moved there from Arkansas.  When I took my focus off of the water I noticed I was standing in the middle of a corn field.  They had cultivated all  of the land in the canyon.  He said that there would be corn and apples until I hit the next highway, and there were. 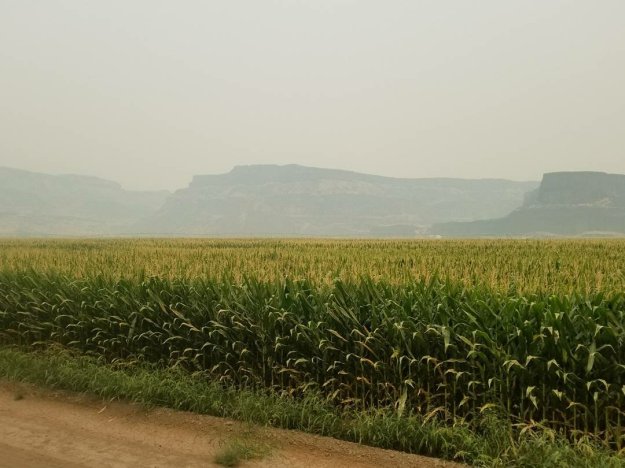 There were orchards after orchards tempting me to stop and steal apples, pears, and the occasional plum.  I was hungry again but wanted to wait for real food.  I felt like splurging at restaurant, mostly to be able to sit and drink something cold.  Rock Island was only 15 miles away and I could wait until then.  When I got there I was starving and wore out.  I ordered two bowls of veggie soup, spaghetti, and handcut fries.  I may have over did it, but I didn’t care.  Oh, and they had sweet tea.  I stayed there for a good two hours trying to figure out where to stay the night. 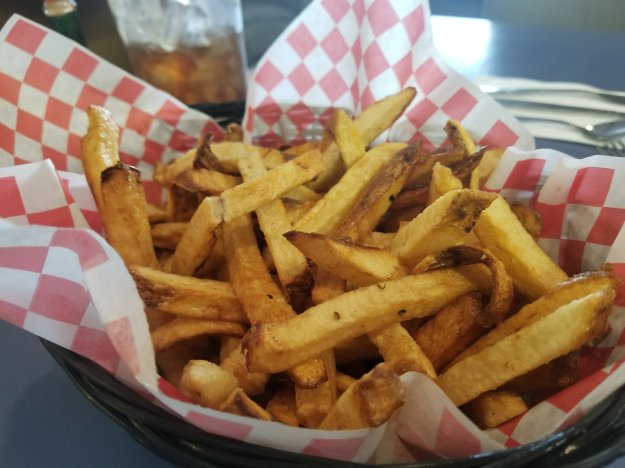 Again, Quinton and I contacted every person on Warm Showers with no luck.  Yes, we contacted them the day before and not an hour before arriving.  I got ahold of Quinton and he was about 20 miles North of Wenatchee and me 10 miles South.  He avoided the dirt road and stayed on Highway 2.  I took a chance and called the Parks and Recreation Office of Wenatchee.  I did my spill and the woman forwarded me to the Housing and Community Planner, Brooklyn.

Brooklyn was amazing!  I went through my spill again and I could hear her mind working through the phone.  She first started with hotels and then campgrounds and then she started to understand.  It was when she started thinking of what places the cops don’t patrol at night that I knew I found that right person.  She eventually told me that she would call me back after reaching out to some people.  When she did she said her friend Deb volunteered to put me up.  I then received a call from Deb and we made plans for Quinton and I to stay in her spare room.

I met Deb at her house in East Wenatchee and she was very nice.  She runs an AirBNB and was empty for the night.  I felt like she and I were kindred spirits.  We talked a little about triathlon and then a little philosophy, food, and even community outreach before she had to leave for a meeting.  I also found out from her that the Amazing Brooklyn was on the US Olympic Bobsled team. I caught a ride with Deb to the mall to look for new headphones.  Not five minutes into today’s ride did my headphones get caught on something and drop into my crankset.  With my new headphones I wandered around and eventually walked back to Deb’s.

When I stay with people like this I usually offer to help out around the house.  This time I got to mow the lawn.  Afterwards I got cleaned up, did some typing, and then settled in for the night with a bowl of popcorn and a movie.  Quinton decided he was done for the day and would camp out where he was.  I think he was too tired to make it.  His route was much more difficult with 1000 more feet of climbing.  It sounded like he had a rough day.  We were only two days’ ride away.  We planned to meet the next day in Leavenworth before summiting the last mountain pass before reaching Seattle, but I would not see him again.