Leaving Missoula.  Quinton and I split up that morning, I to the Post Office and him to the grocery store.  I had to ship my second package home.  It included my old sleeping bag, the minions, my long pants, and some other warm stuff. I waited this long to get a new bag and now it’s warm enough that I’m sending home my warm clothes and don’t even need the new, warmer bag.  But, I dropped 6 more pounds and only added 3 with the new bag.  As soon as I get back I will look for a lighter option for future outings.

We decided to take I-90 West until we ran into Highway 2.  Interstates tend to be flatter and faster than highways.  Both of us have been talking about future adventures and what we will do once we reach Seattle.  Not tired of riding or exploring, but wanting to mostly get out of the smoke and see something different.

The interstate was not fun.  The smoke limited vision, the temperature was up in the 90s, and the shoulder was littered with debris.  After 10 to 15 miles the interstate turned into a one-lane with construction on the West bound lanes.  I couldn’t see any construction workers on the road and the road look was not tore up, so I jumped on and had the two West bound lanes all to myself.  I eventually ran into a construction worker and told him to watch out for another cyclist and to tell him to ride in the construction zone.  This lasted another 15 miles before the traffic returned to the lanes. 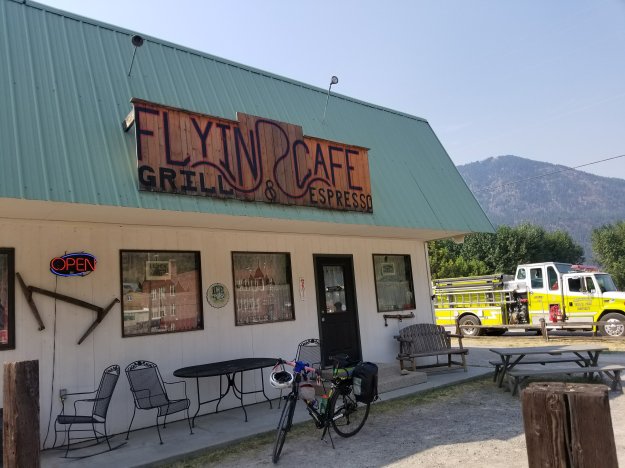 Looking for lunch, I pulled off the Highway into Alberton.  The map said it was the last stop with food for a long ways.  I followed three firetrucks into the Flyin Cafe.  I reasoned that if they drove 30 miles to eat there it must be good.  One of the firemen warned me about the fire up ahead.  He said I would be able to see it from the road. My options for lunch were french fries or a salad.  They also had a cardiac burger, which was two grilled cheese sandwhiches with two beef patties and bacon sandwiched in between.  So, french fries again…

After leaving, I spotted Quinton riding ahead of me.  The wind had picked up and I struggled to catch him, but did after some time.  He hadn’t stopped for lunch yet and was searching for somewhere to stop.  He was out of water and could not eat without it, so I offered my spare bottle.  Rather than taking it, he rode for another hour and spotted a turn off that dropped down to a creek.  He took it, and I rode on.  Not a half mile from leaving him and a sign for a rest area apearred.  I scouted it and he caught up to eat there.  We talked about staying there for the night, but he was hesitant about sleeping at a rest area.  There were signs everywhere forbidding overnight camping.  I assumed those signs were for motorists.

After snacking and watching a movie, I started to get antsy.  If we weren’t camping there then I wanted to find a place before it got dark.  As I was packing up a school bus covered in graffiti artwork pulls in and a pack of dogs and their humans poured out.  They caught everyone’s attention with their ragged clothes, dreads, and obvious lack of hygiene.  I spoke to one of the men to ask what they were doing and he was not very open about it.  I imagine he judged me and decided I wasn’t worthy enough to talk to, because of our differences.  I told Quinton what had happened and he said he too gets tired of people asking him what he is doing.  I learned later from a similar bus and a much friendlier representative that they travel around and provide food for homeless people.  The people on the bus give up everything to help others.

I hit the road and left Quinton napping.  I was going up to the next exit to check things out and look for a place to camp.  Quinton would meet me later.  The next exit was only 5 miles away.  The first thing I noticed was a large field to the right of the off ramp.  Across the road from the field was an the abandoned Stagecoach Inn, an RV park.  I wandered around looking at all of the options. The place was well built in a log cabin fashion.  The electricity and water were both shut off, but I had my battery bank and filled up on water at the rest area.  I kept it as an option, but we would be a little exposed right off of the interstate.  I went North to the river and found a couple of places along with an apple tree that I foraged.

I then went back up to the road to wait for Quinton.  I sat there for an hour and a half before giving up.  He either passed out at the rest area or found somewhere in between.  I started to setup in the open field because it had decent coverage, but decided to check out the abandoned RV park again.  For some reason I pushed on one of the doors, and it opened.  It opened to an large room void of furniture.  The building had a bathroom, closet, office, and the large open room.  I found a broom and cleaned every room before deciding which one to camp in.  The office had a window to the large open room as well as one to the outside.  It also had a lock from the inside.  The blinds to the outside window had fallen off so I reinstalled them and then set up an alarm on the front door to keep someone from surprising me.  I locked myself in and went to bed.

1 thought on “Expert Stealth or Breaking and Entering?”