Thus far I have seen three other bike tourists.  Two were on recumbants and did not stop to talk and the one I met the day before.  I had only travelled 15 miles from Gordon when I spotted the two bikes outside of a convenience store.  It was time to stop for lunch and I had already passed up an all you can eat buffet with Swedish meatballs, fried chicken, and Salisbury steak. 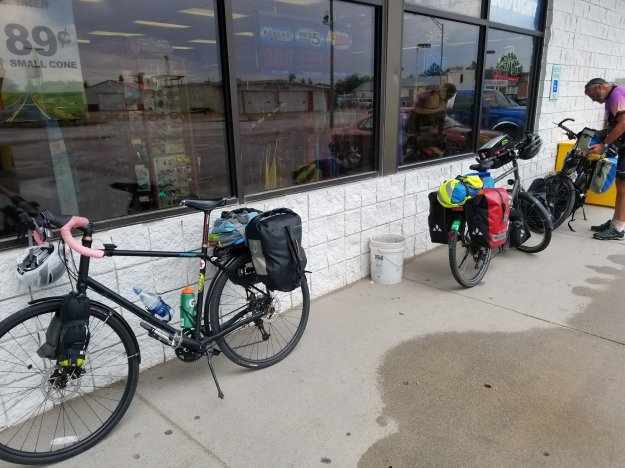 When I walked into the store the cyclists were easy to spot in their matching, bright colored jerseys and spandex.  I walked straight up to them and the older of the two gave me a strange look until he identified my spandex and clicking shoes to be that of a cyclist.  He dropped his suspicion and invited me to join them.  They were a father and son team, traveling from west coast to east coast, originally from Germany.  They seemed to be a good team, playing off of each other when speaking.  Miles of being on the road together will do that.  As we sat there, a light rain hit, which gave us more time to chat.  Before leaving I handed Wolfgang, the father, my card.  Oliver, the son, found my blog from the card and wrote down the name of their blog.  I have read a little of the journey and look forward to reading more.  If you would like to see what they are up to, visit their site here.  You may need a translator…

After the rain, it was even cooler.  For once, I was craving the heat of the sun.  It would occasionally pop out from behind the clouds and I could feel it on my skin.  The ride was pleasant enough.  The guys warned me that the road was a little rough and it was.  I am used to the shoulder having cracks that the front and rear wheels drop in causing the bike to thump hard.  I am sure this is not good for my rims.  In the past I would jump onto the road and ride, but these cracks spanned the entire road.

With only 15 miles to go until Chadron, I could see storm clouds gathering in the West.  I watched as the sky got darker and the wind started picking up.  I rode as far as I could before the wind and rain was too strong.  I had to pull over and seek shelter.  With nothing in sight, I threw the tarp over the bike and waited out the storm.  I had just finished an audiobook and not downloaded a new one and had no service to view anything on the phone.  I didn’t think to try my radio.  My Samsung has a radio tuner that uses the headphones as an antenna to get radio stations.  So, I just sat there and waited. 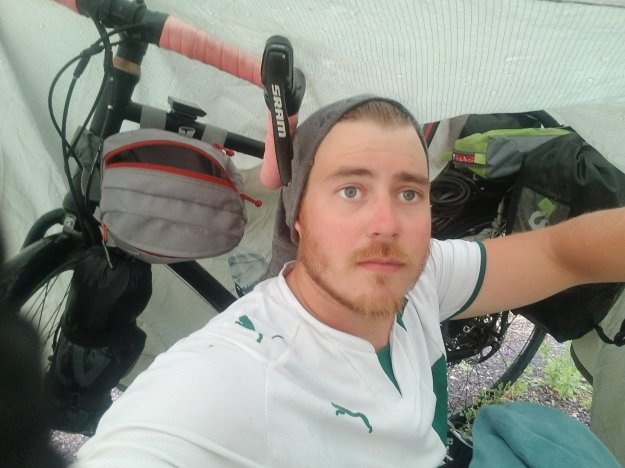 After it cleared I layed out the tarp to dry and changed into dry clothes myself.  I also took out my arm warmers from my cold weather gear.  This kept me sufficiently warm on the rest of the ride to Chadron.  The landscape was changing and drastically.  The hills were getting larger and more wooded.  It was a nice change.  Once in Chadron, before I had the chance to explore too much, Ken called.  Oh, Ken and Jan were also in Chadron.  They got in Friday and I planned to see them again.  Ken agreed to meet me at the Walmart where I planned to buy a new blanket.

Can you spot Sissy?

We three grabbed dinner, this time at a fairly good restaurant.  I think Jan enjoyed it so much that they were going back a second time.  Ken convinced me to go back to their camp and set up.  While there, I got a warm shower and did some laundry.  We sat around after talking before bed.

2 thoughts on “The Germans”